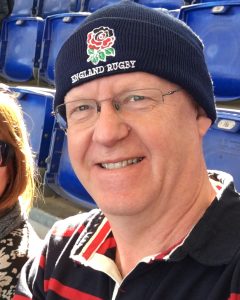 Graham has been a motorsport fan all his life and while he is interested in F1, his motorsport passion is with endurance, GT, classic and drag racing. Watching drag racing in the 80s got him hooked on the power & noise of the V8 and he always ‘wanted a car with that sound’. The Cobra was always a dream car and once he eventually could afford one, he decided to buy as although he had built cars many years ago (Triumphs), he felt it would take too long to build due to time conflicts with work. He finally bought a 2005 DAX with a 350 SBC in July 2015 and has been smiling (mostly) ever since!
Graham has now retired from industry (as a Factory Manager in May 2017) and can now assign some time learning new skills as magazine editor for the club.  He and Debbie are now travelling and socialising more with the Cobra than ever before and loving it (he had to upgrade the Cobra insurance to 5000 miles pa as a result!).