How do you match the fantastic trip that the AK owners club had to Le Mans Classic in 2012? Having completed an epic motorbike ride from the UK to Alcossebre just south of Barcelona in October last year and returned via Santander in Northern Spain I had experienced the beauty and diversity of Northern Spain as well as the sparsely populated and wonderfully tarmacked roads. In addition during the first weekend of September there is a huge Harley Davidson Custom bike gathering/reunion in the village of Alcossebre with thousands of bikes and trade stands populating the promenade. In addition bands play late into the night and paellas are cooked in large pans on the streets. Wouldn’t it be great for the AK owners to visit and perhaps get involved?
A slight problem in contacting the organisers of the event was our lack of Spanish! Google Translate came in useful and after a few exchanges on Facebook and pictures of the AK Cobras meeting with the approval of the Harley Davidson owners of Spain it was agreed that we could exhibit the AK Cobras  in front of the main stage for two days. Time to start polishing!
The logistics of the trip were that we would travel down to Portsmouth and take the Brittany Ferry to Santander in Northern Spain and from there, after an overnight stop, travel across Spain to Alcossebre which is equidistant between Barcelona to the north and Valencia to the South. The return journey would see us traverse northern Spain on a different route and stay in one of the famous Paradores of Spain. These are state run Hotels usually based in historic buildings. They are famous for their history, architectural beauty and being reasonable in price.
The trip was almost hampered by one of our party having his AK Cobra written off by a lorry driver on the A1 in May. But incredibly and with everyone helping out and loads of help and support from Jon and Wendi at AK Sportscars an AK Cobra was born and registered with literally hours to spare before the trip. So quite a running in experience for Graham Kelly the owner.
So onto the trip itself:- 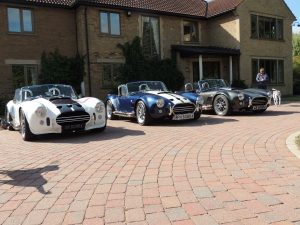 Tuesday 3rd Sept
Peterborough start line with 3 AK’s AK60 BRA – Jon and Wendi Freeman – GB 60BRA Graham and Pauline Barnes and PH 60BRA Paul and Carol Hammond… Meeting with GK 60BRA on route Graham and Angela Kelly……..Trip down to Portsmouth to catch the Ferry and the sun shone!!!  First hiccup of the trip was a cracked windscreen to GB 60BRA on the M25. No time to fix and we certainly would not trust Autoglass on an AK Cobra.
Wednesday 4th
Ferry crossing was perfect and even a couple of whales spotted in the Bay of Biscay as the cars were nicely settled below decks and our safe arrival in Santander greeted us with a perfect sunny evening… We headed out on the N-623 towards our 1st Spanish overnight  stop (130 Km) and we had the most awesome scenery with perfect roads for the AK Cobras to play. The sun was setting over the mountains as we arrived at Hostal Montario in the small village of Montario just north of Burgos that evening ( The owners had delayed their holiday to be open for us!) the whole town came out to greet us and see the cars………..PERFECT start !!!
Thursday 5th–
A very early chilly start as we have around 600 km to conquer today across Spain to our destination of Alcossebre. Every road greeted us with lorry drivers blowing their horns and passengers in cars waving and photographing us on route. We bypassed Burgos and picked up the N234 towards Soria and then Teruel. We stopped for coffee near the town of Soria after 180 Km and then for lunch near Teruel where yet again the Cobra’s caused a town to stir in siesta time a fuel stop was a common sight). After Teruel we picked up the A23 towards Valencia before picking up the CV10 and heading north past Castellon to Alcossebre. We eventually arrived at the Villa at 5:15 pm having covered 600Km in approx. 8 hours in the sun. Time for a beer and a race to the supermarket to get provisions for the compulsory first night BBQ. 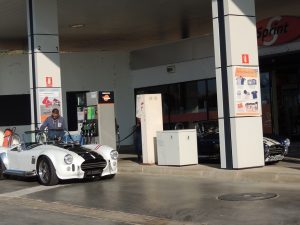 Friday 6th–
Arrival at the villa of Graham and Pauline and a chance to polish and give the cars some TLC before their big appearance tomorrow. 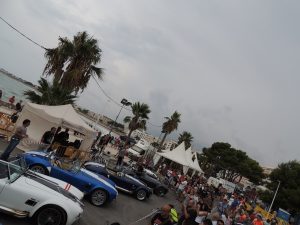 Saturday 7th
Along with a couple of local cars (Westfield owned by Barry Diplock and an MK Indy) we arrived at the 10th Alcossebre Harley Davidson Show – WOW!!!!!! We had been invited to bring the cars along by the organiser and we were blown away on our arrival to be stars of the show and within 30 seconds of the engines being switched off we were swarmed by many denim and leather clad hairy bikers all raving about the beauty of the Cobras. We were ushered to one side and issued with event T shirts and given food and drink vouchers while they put up security barriers around the cars to keep the crowds back!!!!!!!! WOW what a superb greeting for us we didn’t anticipate that level of interest!! The organisers came rushing to see us at about 3pm and informed us that the weather radar showed thunderstorms were about 10 minutes away and asked if we wanted to cover the cars or run for it. We chose to run and arrived back at the villa and donned covers with seconds to spare before the heavens opened. . It didn’t dampen the spirits however as the whole weekend in Alcossebre was dedicated to the Harley show and the organisers had bands on in the evening which played while we danced the night away with the Bikers 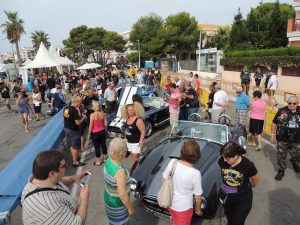 Sun 8th–
Day two of the show and the sun was shining again!!! … Again our arrival to the show was greeted with massive crowds clapping and shouting. We left the crowds looking at the cars while we all went to look at the many hundreds of bikes that had come from all over Spain to be there – AWESOME!!!! Stunt riders exhibited their skills in the streets burning rubber and performing wheelies for the crowd’s entertainment
Monday 9th and Tuesday 10th–
The girls laid by the pool soaking up the sunshine while the boys decided to try their skills at Go Karting at Marlon Karts near Benicassim. The track having a fantastic hilly back drop and then off for a photo opportunity by the sea in the AK Cobras 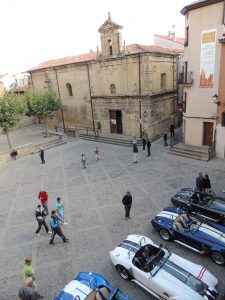 Wednesday 11th –
Early alarm bell (remind me to stay off the Spanish red wine!!- (and Malibu and Coke) for the 6-7 hour (500 km) drive back across country… Here we had the first major problem of the trip. Rounding a bend in the middle of nowhere near a small town called San Jordi GB 60BRA ran over a patch of raised tarmac and reported a noise like a bomb going off under the car. Initial inspection revealed no damage but within 2Km the clutch pedal had ceased to be worthy of the name. Pulling off a single track road revealed that all clutch fluid had gone and evidence of fluid leaking from the slave cylinder under the car. At that moment a couple of local Guardia Civil (local police) arrived. The girls likened them to the Chippendales! They asked us to display warning triangles and don Hi visibility vests and must have been impressed by so many warning triangles appearing and suddenly 8 people donning Hi Vis jackets. They helped us move the car off road into an Olive grove and waited while we (actually Jon of AK Sportscars) went underneath to inspect the damage. GB 60BRA owner Graham Barnes was so confident of fixing it that he was on the phone to Green Flag when Jon reported that it looked like a banjo bolt had come loose and it was fixable. So the bolt was tightened and the Chippendales (Guardia Civil) took us into a local town to buy some Dot 4 fluid to bleed the clutch. It must be special Dot 4 in Spain because it cost about 10 times the UK amount. The Guardia Civil stayed with us until the car was mobile and posed for some photographs with us. We cannot praise them enough for their help
We stopped for brunch in the beautiful hilltop medieval town of Morella!! (Simply stunning town set within its own walls) and headed from there towards Zaragossa on the N332 again such stunning winding mountain roads and scenery…
Another opportunity for a car handling set up check going up and down the hairpins on the mountains AWESOM DRIVE!!!! We stayed overnight in Parador Santo Domingo De La Calzada and the drive through the narrow cobbled street to reach the Parador brought out the whole town to come and see the cars. Luckily we could park the cars underground overnight otherwise we would have had a significant extra polishing job to remove all of the fingerprints. 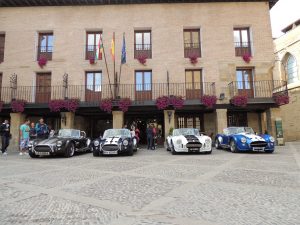 Thursday 12th –
A leisurely drive for the 4 Cobs back up the port of Bilbao on the AP68 for the ferry home…
Friday 13th –
Another smooth crossing we arrived in the late evening to cold wet windy Portsmouth for a quick dash to a local hotel in Port Solent to prepare for the grand finale of our trip. Roofs on and covers over the cars overnight to keep out the rain
Sat 14th –
Goodwood revival2013- The whole clan of Cobfrogs (named affectionately after our trip to the Le Mans Classic together in 2012) were all clad in our 1940’s – 1960’s attire for the event and enjoyed the day watching the racing and a quick slurp of bubbly before heading home having had a most perfect 10 days. 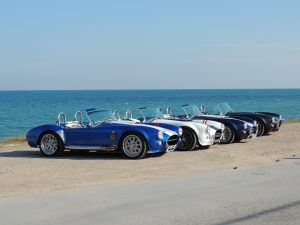