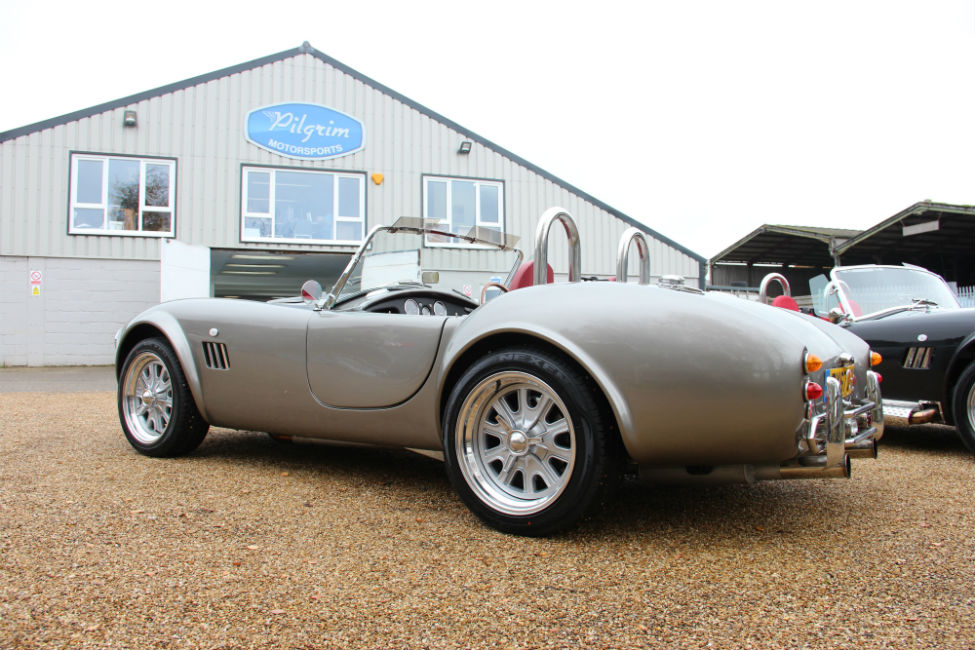 Pilgrim have been building cars since the 1960’s and became an incorporated company under the joint ownership of it’s founder Den Tanner and Bill Harling in 1985. The company was purchased by Tony Holmes in 2002, and then reclaimed by Den in 2009. In 2014 Den sold Pilgrim to Trade Direct Sussex, owned by Paul Bennett and Adrian Hewetson. The company was renamed, Pilgrim Motorsports.
The years of manufacture are shown from the time each model was produced in final Prototype, but it is helpful to remember that a small number of cars fall outside of the production dates shown because they are pre-prototype releases, trials or concept cars. The numbers of each model produced are best estimates, not exact figures, even with these exceptions, all Pilgrim’s models have passed the necessary tests in force at the time, and are fully road legal, low volume production motor vehicles.

Pilgrim Sumo 1985 –
The Sumo is Pilgrim’s most successful model, designs began in 1980, during which a small number were produced, with full production commencing in 1985. Over 12,000 have been built and put on the road. The Sumo is still in production and is the undisputed flagship of the Pilgrim range. It is a replica of the AC Shelby 427 Cobra; The Sumo was originally built using a Ford Cortina donor car. It had a ladder frame chassis with a GRP inner tub and outer body shell.

The introductory price in 1985 for a basic kit was initially £2000. As the car developed a steel frame chassis and V6 engines followed, and later still a Jaguar chassis was added, and V8 engines could be fitted. The chassis of the later specimens were stiffened with floor plates and received box-shaped transverse beams from sheet metal, the manufacturer called this semi-monocoque. The sumo currently uses parts from Ford Sierra’s or Mk3 Ford Granada’s.

Pilgrim are justifiably proud of their chassis’, both design and strength. Following Pilgrim’s Mk1 Cobra Replica in 1997, which was built on a ladder frame chassis, we very quickly learned our lesson and, unlike many other kit manufacturers, promptly swapped to the much stronger, and far more rigid, box frame semi-monocoque design. This is fundamentally stronger and provides far greater passenger safety than a “Ladder Frame’ chassis.

Safety
At Pilgrim Motorsports we take your safety and welfare as our major priority when developing and manufacturing any parts used in the construction of our cars.
The need for change coincided with European requirements concerning the safety of cars in the event of side impact, and the birth of Volvo’s revolutionary side impact protection system which was first seen in 1991. You can note that Pilgrim have two steel bars running down the entire length of both driver and passenger doors.
The changes mean that Pilgrim now offer a semi-monocoque chassis with serious side impact protection at floor level, double side impact bars through both driver and passenger doors which are connected directly to Folded steel uprights on the chassis. If that were not enough, the 1.6mm fluted floors welded to the inner chassis rail act as a cushion in the event of an accident. In a nut shell, that equates to a combined 8mm of galvanised steel which flexes and gives in a way that leaves the passenger compartment well and truly intact.

Deformable Crash Structure
Take a look at the front of our chassis. Note how the angles of the bottom rails have been carefully designed so that in the event of a head on collision, the entire front end of the car folds up, forcing the engine in an upward direction by way of the engine foot plates, as opposed to through the bulkhead whereby you could wind up with a few hundred pounds of V8 on your lap.
Steel bulkheads offer further protection, and just to make sure it does not rust out from under your feet, we have made it the norm to galvanise our chassis’ as part of the build and value added package.

At its height Pilgrim was producing ten kits a week as well as building turnkey cars at the factory. It is believed that Pilgrim has produced in excess of 15,000 kits as cars and kits since its inception in that small garage.

Along the way Pilgrim has also built other cars/kits which have included The Bulldog, Family Tourer, Haldane, Jeepster, Hawthorn, Minotaur, Martini and of course the ever-famous Sumo Mk1 Mk2 & the current Mk3. Pilgrims production numbers must surely exceed the combined output of all its competitors put together.