A new venue saw the East Midlands Club at Kelham Hall, near Newark in March. Roger Edgar had proposed the Hall as he had eaten there previously and found the food excellent. Both Roger and I had visited the Hall to check it out last year and indeed it looked a perfect venue.
I went to the Hall in January to book the meal for 20 persons on hoping that it would be a good turn. No issues with booking and all appeared well. I do like to check beforehand that all is well and my Son and I had a drive over the day before the meet. We went straight to the restaurant and saw a young lady who we confirmed that instead of 20 for lunch it would be 26 and was there any issue with that? She did recall seeing the booking, made a note of the numbers and off we went feeling positive that all was ok. Luckily, I took the opportunity in showing my son around the house a little and indeed outside when a couple of guys came running after us stating all was not well and that the restaurant did not open until Easter and so would be closed for our meet! Jonathan, the owner introduced himself and profusely apologised for the mix up. However, all was not lost and Jonathan had booked the Kelham Fox pub provisionally for us which was within walking distance of the Hall. What I could not understand was that he had sent an email stating that the kitchens were closed. It turned out that Pete Knighton had sent them a mail asking about gluten-free meals. All was becoming clear! Anyway, took the opportunity to request that we all park up in front of the Hall and Jonathan readily agreed. Due to the mix up, he also invited the club members to tea and cakes later in the afternoon in the Hall. I thought it best to nip over to the Kelham Fox and ensure booking was ok. Thank goodness it was!
My friends from Leeds, Simon Smith and his wife Cath were coming to my house in their Cobra on the Sunday morning so we could convoy to the Hall. One great disappointment was that the DVLA was giving Lionel Garrad headaches getting his Cobra registered in time for it’s first meet. Let’s hope to see it in the flesh in April! 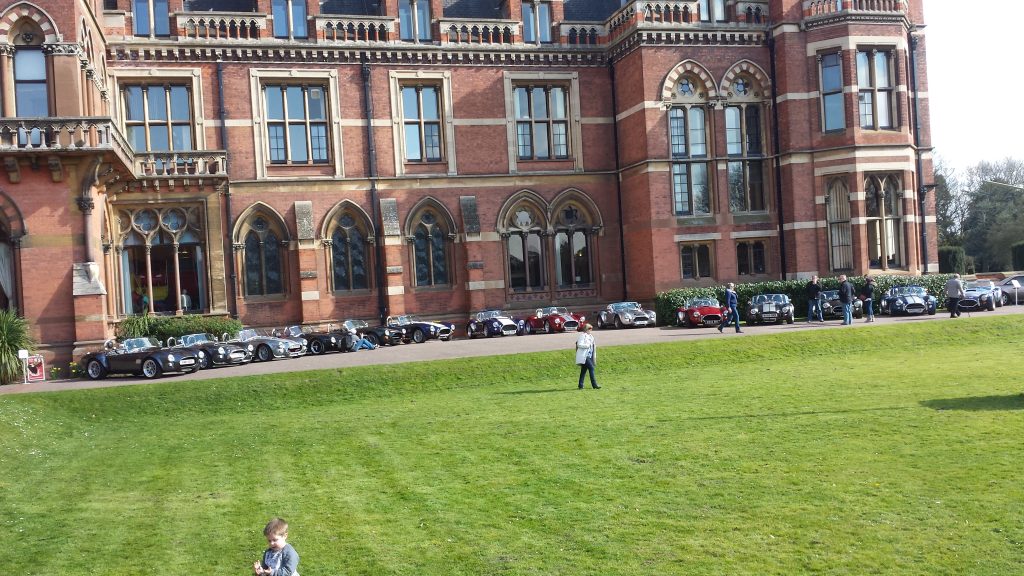 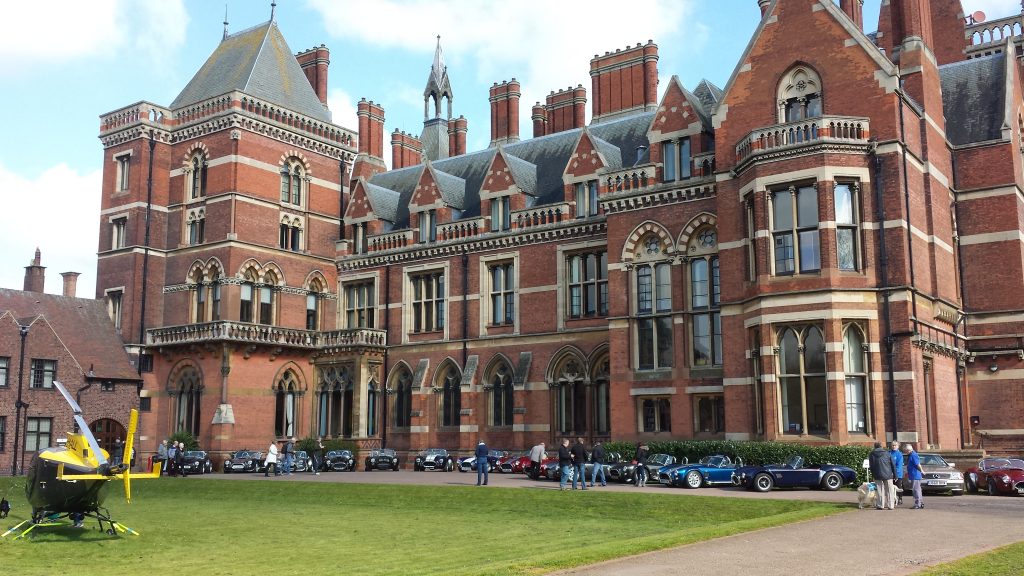 We woke on the Sunday morning to a brilliant day with sun streaming in through the curtains. Forecast looking good! Si and Cath arrived around 10am, had a cuppa and chat and left in plenty of time to make the 12pm midday meet. We were quite taken aback in entering the grounds to all the folk milling around. It turned out to be a fun run in aid of charity. To get to the front of the hall we had to go under the finish tent which caused quite a lot of amusement and photo taking by the organisers! Pete Robertson had already arrived and he followed us through. Got parked up and soon there was a steady stream of Cobras arriving and parking up.
Overall 17 Cobras turned up on the day which was an excellent turn out. Many looking like they had been polished to look their best in the spring sunshine. Roger couldn’t resist giving his AK a final buffing.
We all walked over to the pub in time for lunch and they had set out a long table in readiness for us. There was plenty of choice from a Sunday roast to many other options off the blackboard. We did not have to wait that long and what was excellent, was all the food came out together and certainly the meals were wholesome and good. Nearly all had finished when Tony M arrived! Ensured we gave a big applause. His excuse that his car would not start fell on stony ground as most of us believed it took that long for him to walk over!!
Back over to the Hall where much interest by onlookers taking photos made for a pleasant afternoon. We could not miss the free tea and cakes which were delicious. Many thanks to Jonathan the owner of the Hall for the food and drinks and especially for letting us park in front of the Hall.
Some suggested that Tony had arrived by helicopter. This idea was soon dismissed as the engine was not big enough to allow it to take off!! If it had been something like a Chinook then maybe we’d have thought differently.
Attendees were, Charlie & Audrey, Stuart (new member building a Cobra), Russ, Richard & Helen, Lionel & Karen, Ian & Kathleen, Pete Robertson, Si and Cath, Pete & Linda, Brian Cooper, Graham & Deb, Alan & Linda, Roger Edgar, Pete & Jayne, Pete Cooper, Alan Daubney, Roy & Carole and Zac & Rose with Tony bringing up the rear! If I have missed anyone out, then please accept my apologies.