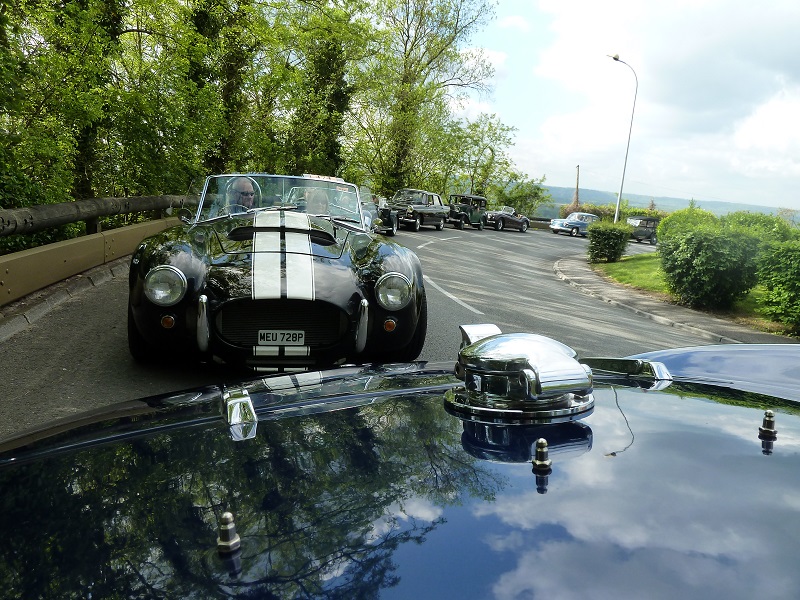 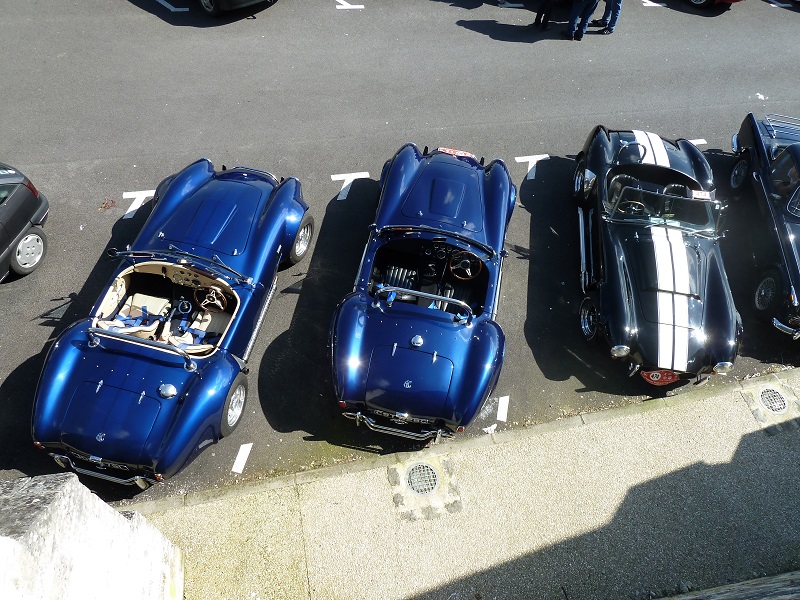 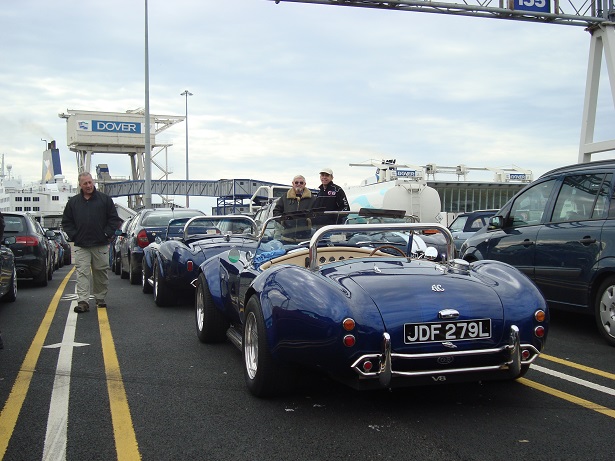 We continued our journey without further mishap to the Hotel on the outskirts of Laon where the event was taking place. We were handed an information pack on check in with our event number and some information for the following two days. Most of it was in French however. After a long two days of driving we decided to eat in the hotel restaurant. We had a choice of two menus, 17 euro and 22 euro with good choices. So after our fill and a few beers we decided on an early night to get an early start in the morning for signing on etc.
We were greeted by sun on Saturday morning which took some explaining to some of us because we hadn’t seen it for so long, but we didn’t complain and overcame the shock. We fuelled our cars and drove into town to make our way to the summit of the hilltop town where the day’s activities started.  I’d better explain at this point that the event we entered is one of the largest Classic Car Events in Europe, so they claim, where this year 650 cars were entered to take part in a tour on Saturday and a parade on Sunday through closed roads around a 16 km circuit in the town and up the winding hill to the ramparts at the top surrounding a medieval Cathedral. As is standard fare on all Classic car events you are held in a queue for what seems ages until all the old precious cars overheat just before their drivers do the same. Determined not to get flustered we waited patiently and eventually reached the top to be met by admiring crowds and goody bags. We made our way as directed to the rear of the cathedral grounds and parked up with many other cars. On opening our bags we found some instructions leading us to a tulip route book which would direct us around the 170 mile route. Each page had 14 diagrams with the distances set out to the next turning and a total mileage alongside.
It only took one glance at our five female companion’s  to realise that after sitting in the rain to Dover and then all the next day driving through France, we were not going on the tour with them navigating us from a tulip road book. I must say I didn’t blame them either. We decided to make up our own short tour driving through some towns and villages without the hassle of navigating every few seconds. We eventually ended up in St. Quentin which has a lovely square and enjoyed a very nice lunch and a drink. Although many locals gather on route to watch the cars go past, I couldn’t help but notice that most of the places we travelled through appeared to be deserted. All of the houses along the roadside seemed as though they came from a railway siding in the 1960’s.Very strange. When we got back to the hotel Harry had a flat ish front tyre with only a few psi in it. It was pumped up and allowed to rest overnight. When we met up with Eric & Brian we were pleased to hear that they had completed the full tour route and went to all points, and had a free lunch with champagne provided by the organisers in the town of Vervins. Well done to them.
I had previously booked a restaurant in Laon for our Saturday night meal and we decided to get Taxi’s so as we could all enjoy a drink. We arrived at “La Peche Mignon” just off the square and the Cathedral. We enjoyed an excellent meal, 4 courses for 24 euros. The staff were very polite, friendly and efficient and a good time was had by all (Photo 8). We retired to bed very weary.
Sunday dawned dry and very bright. Harry and Loren decided to sit out the day with their Cobra due to the tyre issue and travelled in with Neil & Chris in the Q5. We were advised to get to town early so as to park up in the main square ready for the closed road tour. We achieved the first part but were directed out of the square by a very surely Frenchman defending his bit. To be fair they had two low loaders removing illegally parked cars to make room for the event. It appeared though that only certain cars were allowed to park there. In the end in proved to be a blessing because they were all hemmed in and many hundreds of people were mingling in amongst them for most of the day.  It transpired that the tour of the town circuit would have three start points and would commence at 14:00. We moved our cars from the car park to underneath the ramparts to join on the back once under way. 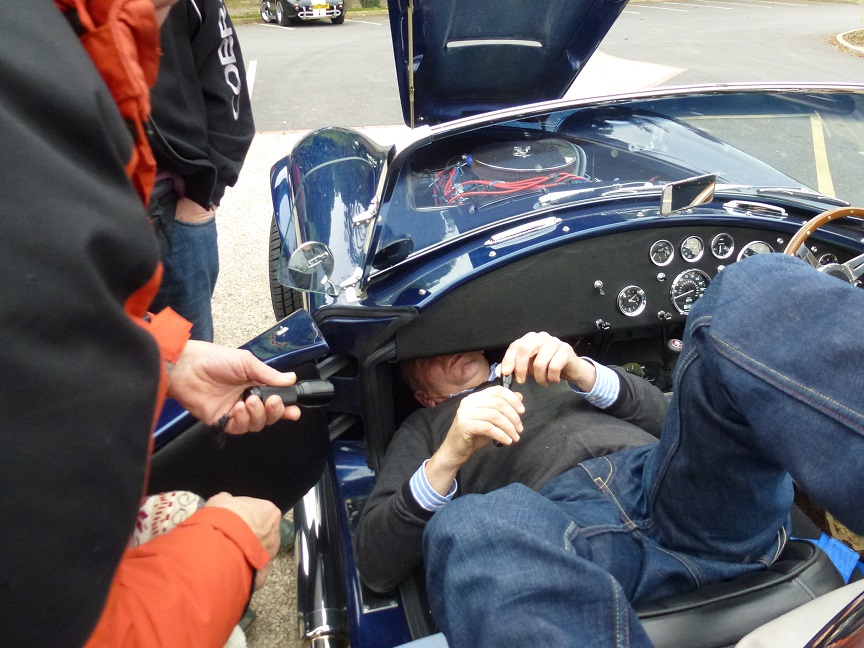 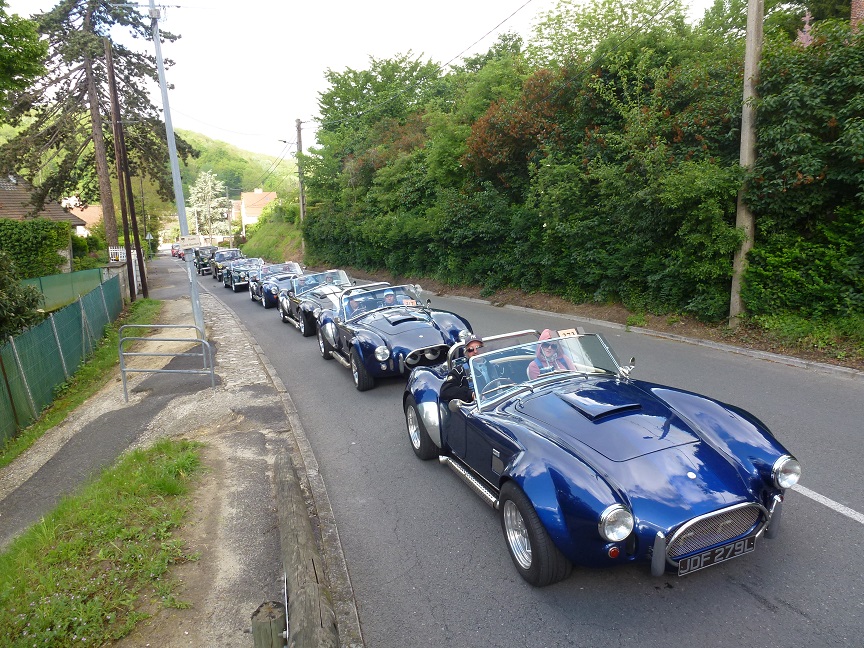 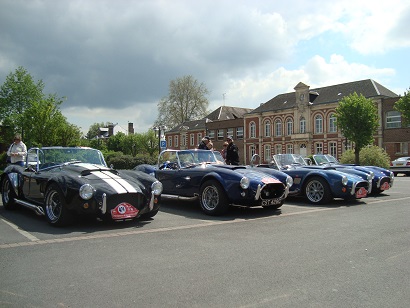 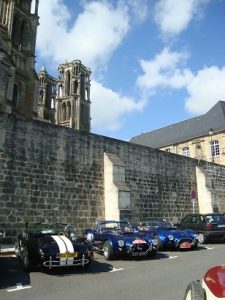 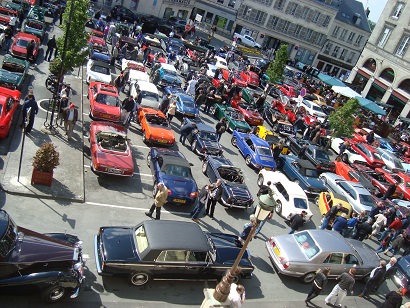