The ‘’Meet’’ for August was organised as a weekend away tour in Wales early on in the year. Again, Russ and I listened to our membership who responded with options of meets and ‘’like to do’’ and were able to put this tour into the diary. Obviously we cannot fit in all suggestions but where possible we aim to please.
The tour itself was organised by Andy Cox and his partner Jennie. The time and effort that went into the planning of this tour was absolutely fantastic. For those who were not able to join us, the tour sheets totalled 41 pages for Saturday and 31 pages for Sunday and covered just over 300 miles of driving. Sat Nav’s were not needed as the directions were clear and concise.
The following attended, Charlie & Audrey Freeman, Andy Cox and Jennie Hewett, Simon & Cath Smith, Lionel & Karen Garrad, Ian & Kathleen Dargue, Paul Sephton, Ed Norton, Russ Owen, Richard & Helen Smith, Brian & Helen Cooper, Jonathan & Helen Rummey, Rich & Lisa Hill, Lee & Angie Whitworth and Sion & Greig who live in Wales.
Lionel had suggested that it would be less tiring if we made our way to Crewe on the Friday. This made sense as our friends from Chelmsford, Jonathan & Helen and Si & Cath from Leeds had a fair way to travel. Jonathan arrived my house in readiness for bacon butties and at 2pm we left Newark in the rain with hoods up to meet Lionel and Si at Shardlow Services on the A50 at 3pm.
A brief stop and onwards to the Premier Inn at Crewe Nantwich. This was going to be the original starting point of the tour but The Peacock Pub had stopped serving breakfasts so it was changed to Rookery Wood Fayre and Square Pub who had generously opened up early at 9.30am for us all to get breakfasts.
We had a hearty meal in the evening at the Peacock Pub and retired tired from the days driving. It is surprising how much more tiring it is with the hood up and the wipers trying to clear the screen!
We made our way to the tour start and breakfast and within a mile spotted Andy and Jen. All pulled up at the petrol station to fill up before the tour. Luckily we followed Andy to the start as all of our sat navs were telling us to go the other way! This did not bode well but luckily all made the venue in time for food and the 11am start.
It was quite funny at the start as Andy’s father had come to wave us off with a Union Jack Flag. We resisted the Le Mans start as too much running may not be the best idea after a fry-up breakfast! We made our way through Whitchurch, onto Bangor on Dee, toward Ruthin and Corwen and Betws-y-coed. Our first port of call for refreshment was the RHUG Estate Farm Shop. We should have arrived at 12.30pm but arrived at 12.33! Only 3 minutes out from the plan! The car park was full but Andy had pre-arranged for us all to park in the Deliveries Only area. 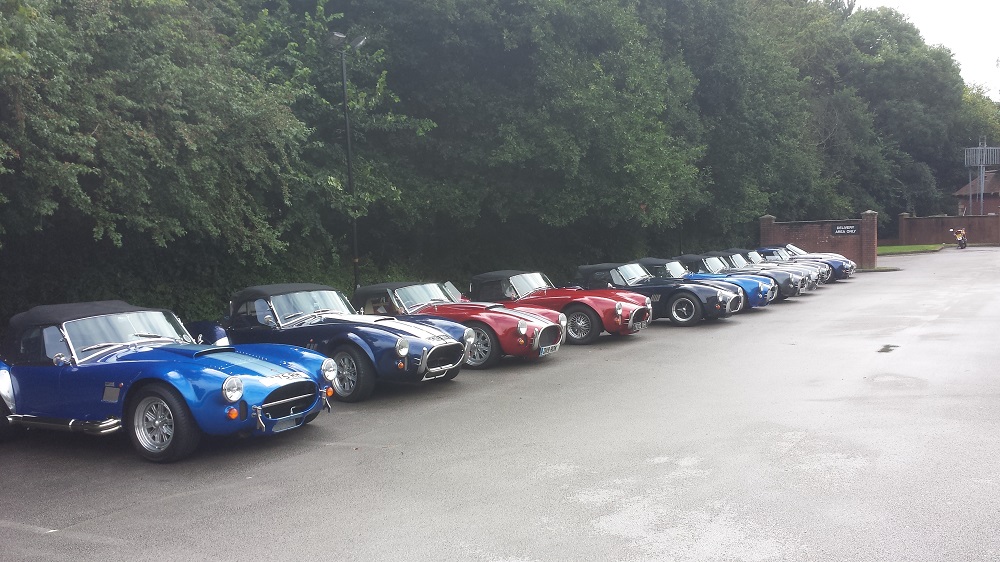 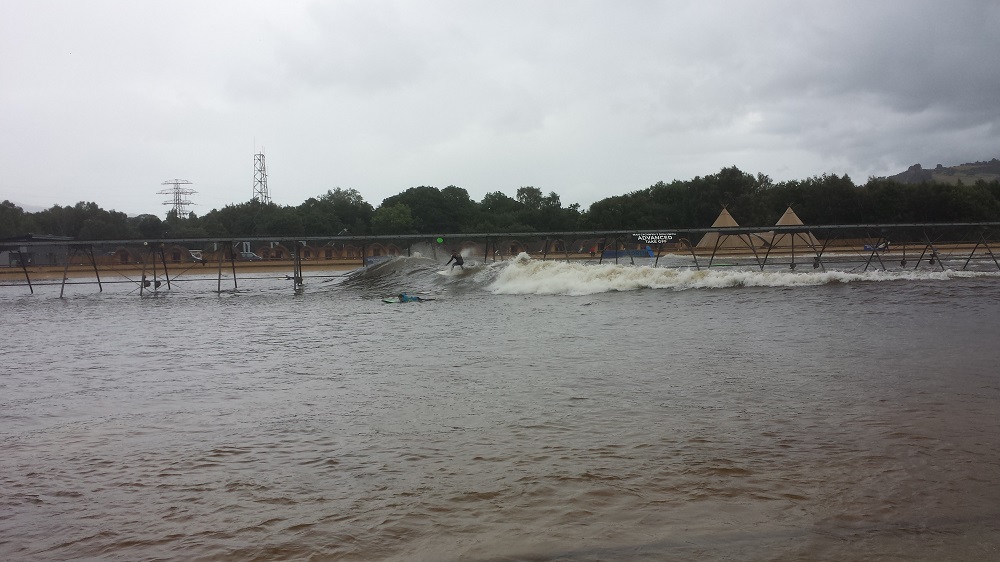 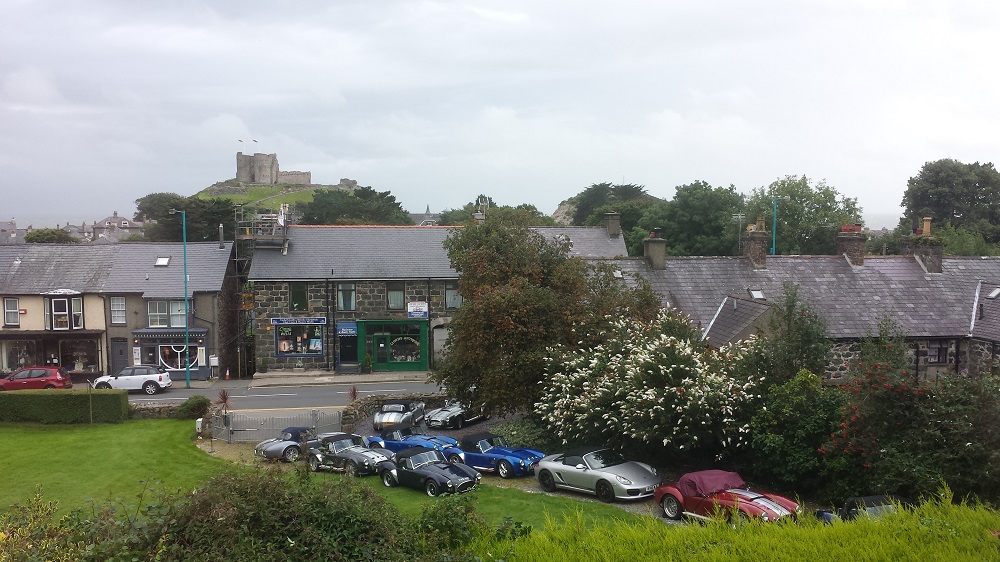 I cannot remember at what point my wipers started to play up but the high wind and heavy rain made the passenger wiper come loose. We stopped abruptly to try and fix. Paul and Ed stopped and assisted. Wiper all taped up with Gaffa Tape and onward once again. It was not long before the blade turned through 90 degs and was in great danger of scratching the window and bonnet. Again stopped when I could and this was not easy as at that point, the roads were narrow and no pull in’s. I took the arm off completely to stop any damage. Onward we went to catch up with the others only to find the middle wiper had decided to come free of the locking position and started to hit the top of the screen. Again stopped and Gaffa Taped it up. Luckily this held through the weekend but I must admit that I was getting nervous of the drivers side coming loose!
Onward through Cerrigydrudion to the top of the EVO Triangle and then back down the other side to Pentrefoelas and then into Betws-y-coed. On toward Trefriw/Roman Spa and stopped off at Surf Snowdonia.
WOW! What a place, never seen anything like that before! Man made surf in the middle of Wales. The photo does not do justice to the size of the waves produced.
Must admit that it is not my kind of sport but you can see why it is well supported. Again we arrived spot on time at 3.15pm
On toward Conwy and Llandudno. Onto the A55 where we had 8 miles of great fun going through the three tunnels! Sometimes two abreast where safe, foot hard down in a lower gear making as much noise as we could! Absolutely great fun! Paul and Ed in the Porsche with Paul taking pictures and videoing us going through the tunnels. Well, that was until the phone whipped out of its case and went flying back down the A55 never to be seen again! (not in one piece anyway).
Up toward Bangor and then back down the coast road toward Llanberis and Portmadog and into Criccieth where we were staying at the Lion Hotel. The owner had allowed us to park up on his private driveway to his lodgings at the back of the hotel.
After a reasonable meal at the Red Lion Hotel and a number of drinks we headed for bed and a good night’s sleep in readiness for the tour the next day. The gin and tonics went down well by the look of Simons face! 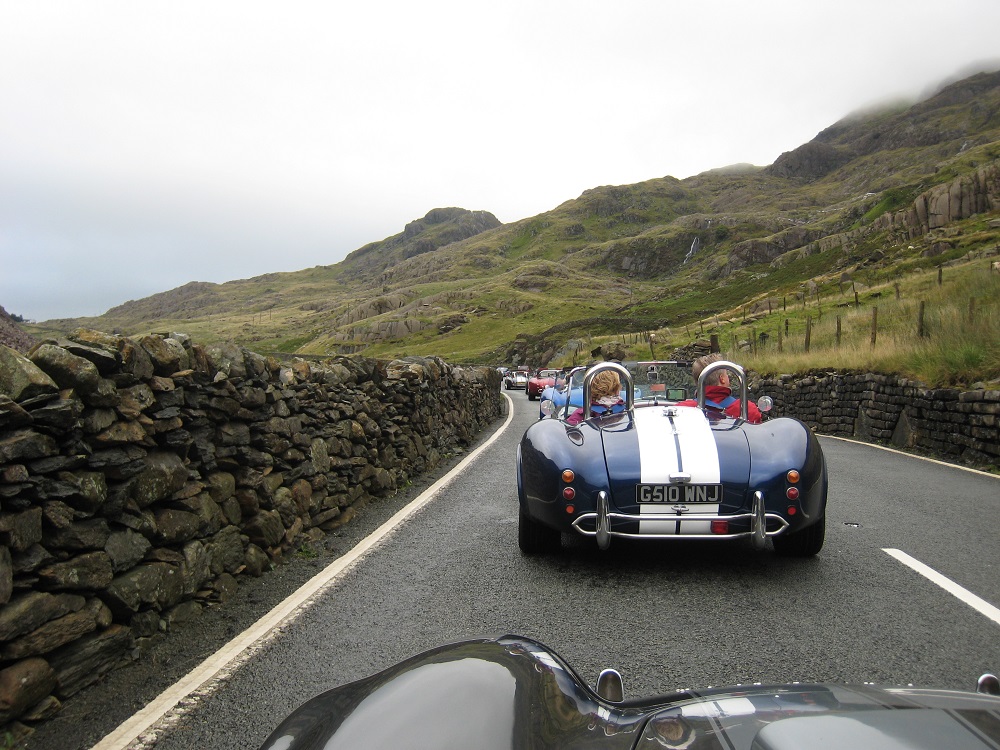 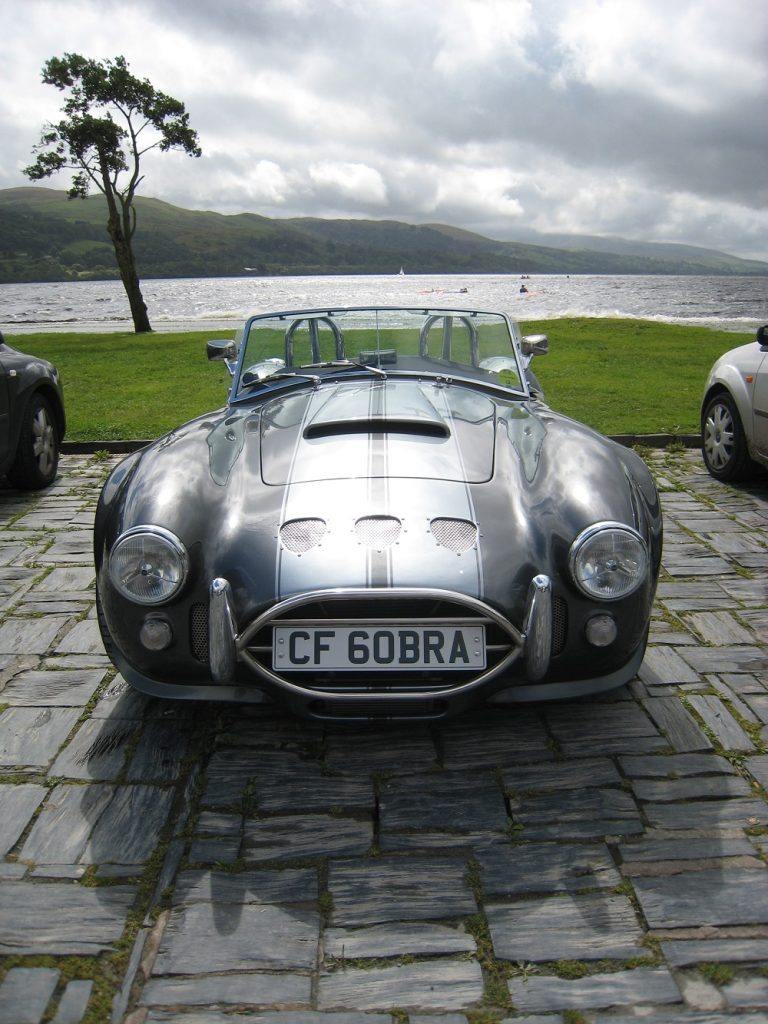 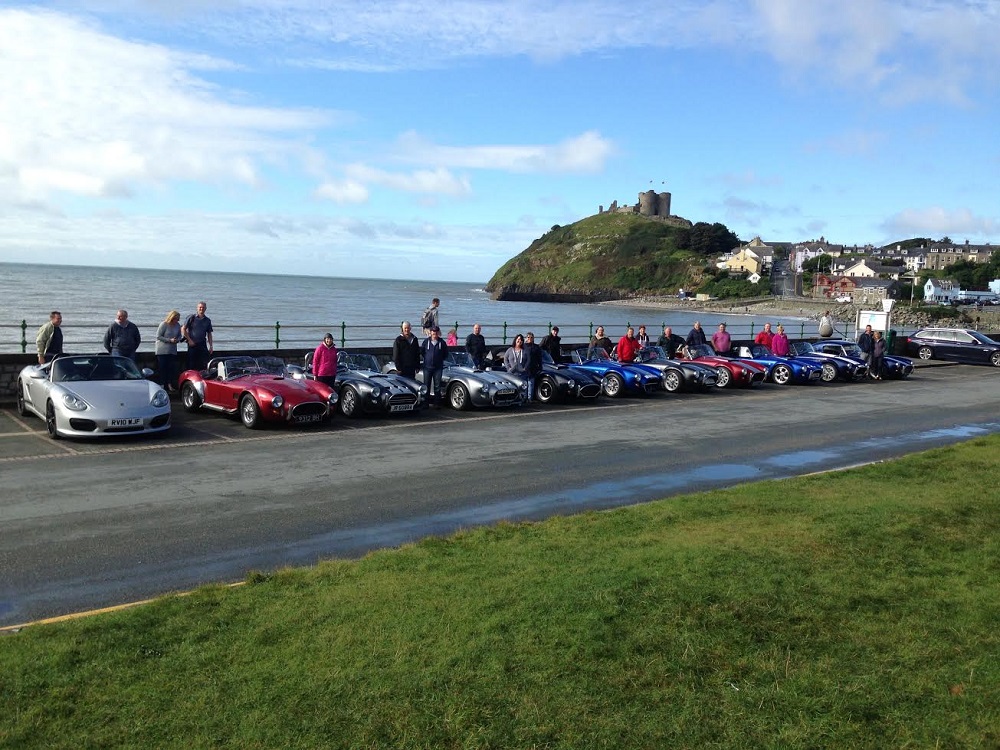 Awoke to find the sun shining which certainly made a change from the Friday and Saturday. Discussion had taken place that it would be a good idea to have a photo shoot on the promenade with the Castle in the background. Criccieth appears to be the average seaside town and it does have an appeal with a good beach
With photo session complete we headed for our first stop at Swallow Falls. This took us through Snowdonia National Park with great views and scenery around Llanberis and Capel Cruig
Arriving at Swallow Falls late morning in readiness for sustenance! Point to note! – Do not have the Scones as they are as hard as cricket balls! You now have to pay to go down to see the Falls but it is worth the money. We benefited greatly by having to persevere with the rain the previous days as the amount of water going down the falls was seriously impressive!
Onwards through Betws-y-Coed and down to Festiniog to our next destination of Bala. Normally there is ample parking here but as there had been so much rain, much of the carpark was flooded! Eventually we all found places to park. Bala has a beautiful Lake with many people Wind Surfing
Bala was for some a good place to end the tour. Those who lived in the North and South and indeed Sion who joined the tour from Wales made their departure.
The remaining six Cobras made their way East toward the finishing point at the Swan with Two Necks. The Sunday section was approximately 165miles which was quite a haul but very enjoyable. Rich (Stokeflyer) took over the lead car role as he lives in Stoke and knew the easiest route for us to get through Stoke and onwards to Nottingham and Newark. A blast through the last little tunnel in Stoke and homeward bound we went.
Jonathan and Helen were stopping at our house before going back to Chelmsford on the Monday so we had decided to complete the weekend with a Pizza each liberally swilled down with a few beers! Lionel and Karen joined us to assist! Yes, the Pizza’s really are that big!!

This was a really great weekend and enjoyed by all. The route and routes maps were seriously impressive and Andy has kindly offered to put together another route for 2017. Hence, this will be one of the suggested options for next year.